Single Leg Romanian Deadlift: How, When, and Why It Should Be in Your Training

Nearly every athlete can benefit from performing unilateral leg training. Increased neuromuscular control, joint and muscular function, and muscular hypertrophy and endurance are just a few of the expected positive outcomes of including such movements (like the single leg Romanian deadlift) into training programs

Therefore, in this article we will discuss how to properly perform single leg Romanian deadlifts, what progressions and adjustments can be made, and why they are important for optimal hip function.

The below video is a step by step video tutorial on how to perform the single leg deadlift and it’s variations.

It is important to note that these can be performed with a barbell, dumbbells, kettlebells, and many other external forms of loading.

This exercise is often done either as a primer/preparatory/corrective movement (before training sessions) to increase glute and hamstring engagement and enhance movement patterning of the hips and spine during movements such as squats, pulls, and many human locomotion patterns.

Additionally, this exercise can be done in assistance training blocks to increase hamstring, hip, and glute musculature for added hypertrophy.

Loading for this is often kept in the low to moderate range, as balance, coordination, and movement patterning plays a large role in the success of this movement. As with many exercises, coaches and athletes can progress accordingly, however should not excessively load this movement and/or challenge maximal pulling strength, but rather to facilitate hip to spine movement mechanics and isolate the hamstrings, glutes, and lower back.

Below are four main benefits of the single leg deadlift for all athletes, regardless of sports. 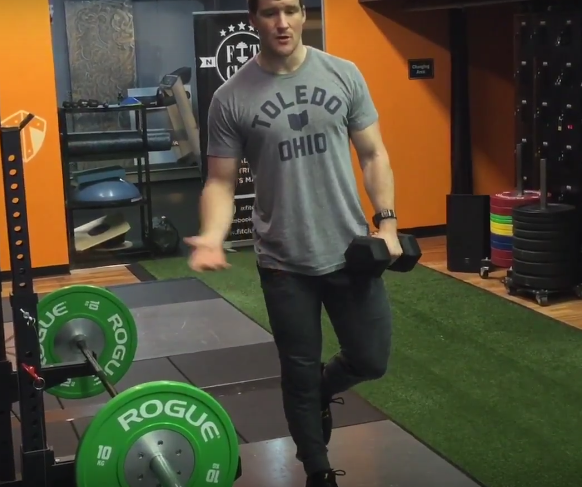 One variation of the single leg Romanian deadlift, however many others are shown above.

Application to sport may be higher (runners and sprinters) than others (weightlifters), however that doesn’t not mean coaches and/or athletes should neglect basic human movement patterning. Even the smallest of frequency and training volume can play a huge role in improving hip and spine mechanics during most movements and enhance injury resilience.

Whether used as a primer exercise or corrective movement, this unilateral deadlift variation will uncover any movement asymmetries between each side of the body. If an athlete has a disconnect that is causing hip shifting in the squat and/or pulls, or have movement limitations in one leg more than the other; this may be a good option to re-teach a fundamental movement. Lastly, for locomotion sports (running and formal athletics) the mechanics of the lower limbs are generally done with one leg (at max) being asked to support the entire body throughout dynamic movement making this a great exercise to prevent movement disorders.

This unilateral deadlift variation is a great way to increase muscular hypertrophy and endurance in the hamstrings and glutes. Additionally, this exercise can be build in to increase training volume to get beginners more apt to locate and activate their hamstrings and limit the amount of lumbar extension occurring during most pulling and hip hinging (flexion and extension) movements.

The ankle, knee, hip, and spine must coordinate stable and dynamic movement throughout the movement in an unstable environment, making the complexity much harder than a standard Romanian deadlift. The added benefit of balance training, intrinsic foot coordination and strength, ankle and knee stabilization, and hip function make this a great exercise for assessing lower body balance and stability as well.

Whether you are a weightlifter, powerlifter, strongman, fitness athlete, or formal sports athlete, this exercise can used to increase movement patterning for nearly every pulling movement, increase joint and movement integrity, and bulletproof your body. Incorporating these into your training can be as simple as adding them to your movement prep, warm up, or assistance work.

[Need a healthier squat? Build it with these two squat variations!]

To help facilitate sound movement patterning, joint integrity, and optimal functioning of the muscles during complex movements, unilateral training exercises like the single leg Romanian deadlift can be trained. Coaches and athletes should never sacrifice movement mechanics for loading, especially in movement based exercises such as this.